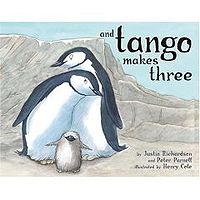 And Tango Makes Three, by Justin Richardson and Peter Parnell (2005)

Since its release, "And Tango Makes Three" has consistently been a frequently challenged book.

This book is based on a true story about a penguin family living in New York City's Central Park Zoo. Roy and Silo, two male penguins, are "a little bit different." They cuddle and share a nest like the other penguin couples, and when all the other couples start hatching eggs, they want to be parents, too. Determined and hopeful, they bring an egg-shaped rock back to their nest and proceed to start caring for it. They have little luck, until a watchful zookeeper decides they deserve a chance at having their own family and gives them an egg in need of nurturing. The dedicated and enthusiastic fathers do a great job of hatching their funny and adorable daughter, and the three can still be seen at the zoo today. (PreSchool through Grade 3) --  Library Review

Individuals and groups in at least 15 US states have challenged libraries over And Tango Makes Three, seeking to have the book labeled with a content warning, moved to a different section of the library or removed from shelves altogether, according to the ALA's Office of Intellectual Freedom.

Examples of Challenges to And Tango Makes Three

Here is a selection of commonly challenged books in the United States: 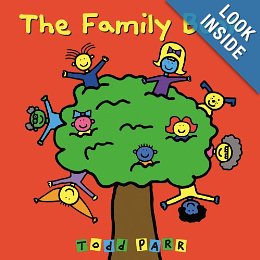